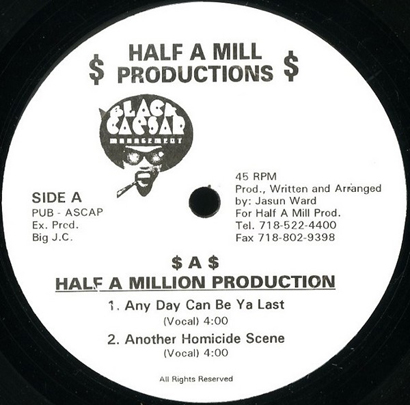 I found this myserious 12′ single in a dollar bin a few days ago while going through heaps of forgettable records, but then the Afro and $$ visuals caught my attention. Well it turned out to be a very good score because “Any Day Can Be Your Last” is a pretty hard to find 90’s record.

It’s got that instantly recognizable 90’s production that will make you think you’re listening to a Beatminez, Jeru or Craig Mack record. It features in the chorus a great use one of the classic lines from Nas’ “Represent” (produced by DJ Premier)

I didn’t know about Half-a-Mill but apparently he passed away a few years ago, so R.I.P. There was a movie (info below the track) about the rough life of the everyday hustle of gang violence and trying to make it in the music industry. Definitely going to check that one out… But start with that track!

Player Hating: A Love Story follows Half-a-Mill and his Brooklyn crew, The Godfia Criminals, as they struggle to launch Milion, in an effort to attain money, success and recognition through music. Player Hating delves intimately into the lives of young “thugs”, and takes the viewer into an underground world of poverty, alienation, gangs, violence and music that most audience members have an inkling of, but few rarely see—unless they’ve lived it.