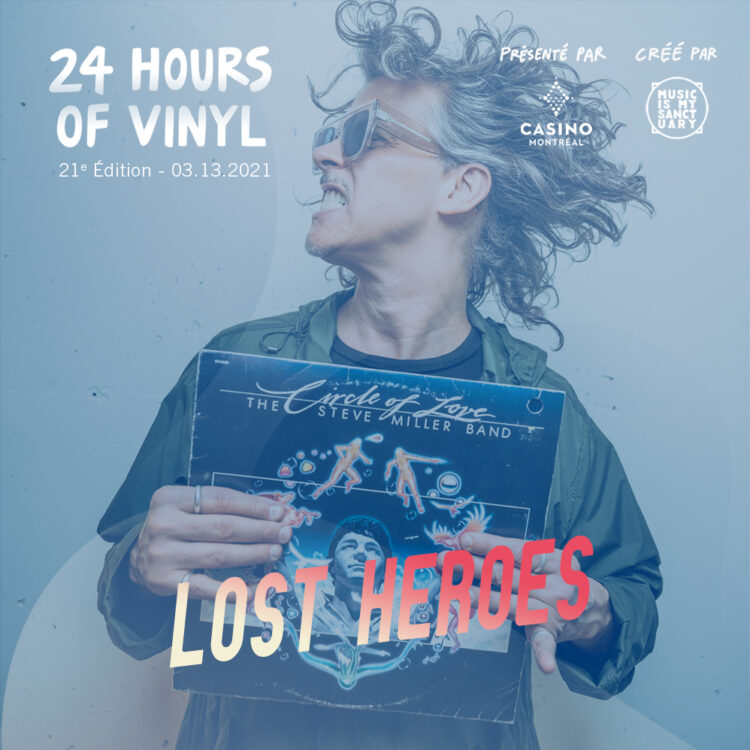 In honour of his upcoming set at our beloved 24 Hours of Vinyl event, we wanted to have a talk with Montreal’s Lost Heroes about… records! What else!?

80’s oddity, part NewWave part Cosmic not really sure if it’s Canadian or it’s a licence on the Quality record label . I totally forgot about it until recently … Kinda pricey but worth it just to re initiated some cells in my brain …

So many !!! I could name Moroder / Kraftwerk/ Fela / Pink Floyd / James Brown but one of the record that really opened my mind to something that would stay with me for the rest of my life was : BYRNE & ENO – MY LIFE IN THE BUSH IF GHOST ! One of THE most groundbreaking records of the past 50 years !

Alan Parson Project – Lucifer … One of my many signature songs , Alan Parson was the engineer that worked in the PinkFloyd seminal album Dark Side of the Moon & went on with his artistic career releasing many great projects. This is totally timeless, Cinematic, Inspiring, Fierce & Full of hope !

I have ZERO guilt and many pleasures – Olivia Newton John – Magic ! Played at the proper time & space that can be a life changing experience! It’s all about MAGIC

In Embrace – The longer living daylights… although this was recently repressed & way cheaper that the price I paid , I have no regrets! Music Information is priceless , specially when you hear something like that & you have no idea of what where & who !!! From time to time records like this comes up … (thanks to Erol Alkan for playing this)

In Embrace – The longer living daylights

Records don’t empty Dance floors , DJ’s do ! That said some song/track can be quite challenging but that is that is part of the ArtForm of DJ’ing keeping a fragile balance between what you want to play & what you need to play … Not always but a tricky one LCD SOUNDSYSTEM- LOSING MY EDGE .

That is my Trilogy