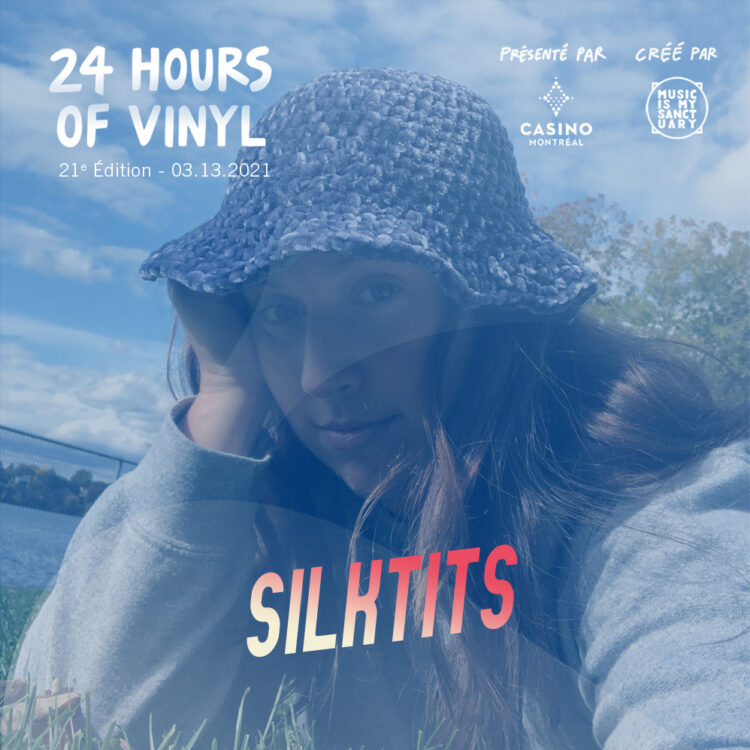 In honour of her upcoming set at our beloved 24 Hours of Vinyl event, we wanted to have a talk with Montreal’s Silktits about… records! What else!?

Keynotes is Kevin Saunderson. I didn’t know this until I found it at Death of Vinyl. It’s an old school Detroit slow burner with a laid back groove.

The track available on YouTube is called ‘In the Mood’. I love its swing beat and haunting/beautiful vocals. I’m fairly certain I’ll never be able to afford the one that’s on Discogs!

Andy ‘N’ Soul – Because Of You

A USSR compilation. This one is wild! It’s the perfect bar gig record. My favourite tune is “Arsenal – Street Pulse” for its jazz fusion melody with sprinkles of acid-like fake scratching.

If i’m relaxing I want to be listening to an ’80s New Age record.

A crowd pleaser and one of my favourite dance records. I have played it a few times out and I will continue to do so!

If you know Sparrow Bar (where I did both Fridays and Saturdays for almost 2 years) you know that Sparrow after about 1am could get messy. This was mainly due to the fact that it would clear out around that time and had a substantial bar tab, at which point I would only play what the bartenders wanted to hear (hence Tal Bachman) and they would make me delicious cocktails.

This is one of my favourite songs because of its cheeky lyrics and theatrical 80s synth sounds. There are actually a couple of versions of this song and I love playing both of them.

It’s corny and I love it!

Krush – House Arrest (The Beat Is The Law)

I wouldn’t say “serious money” in the grand scheme of things but I buy cheap records normally so I had this one shipped overseas. I bought this LP for one song only – “NIJE ZBOG PROLEĆA” after I heard it in a DJ Vegetable mix. It is the only track on the album that I actually like.

I bought this one a while ago with the French extended version, and recently found the original mix in English. My boyfriend told me he found this song and asked if I knew it and I said “of course, I’m a DJ…” (just kidding I just told him I had that one) and then found the second copy a week later which was serendipitous. It’s so fun and spooky!

My boyfriend “gave” (lent) me this one. I uploaded it to my YouTube channel, theres a little skip in it but you can still enjoy it!